Iceland may only have a population of roughly 300,000 but, as a nation, it punches well above its weight in many things: in terms of its scenery, its musical output and, most recently, in its footballing achievements.

For naturalists and ornithologists, Iceland has puffins and arctic terns. For musicologists, it has Sigur Rós and Björk. For geologists, positioned as it is where the continents of Europe and North America rub up against each other, Iceland is something of a mecca. It is a country of glaciers and fjords, of mountains and volcanoes, lava fields and basalt columns, of hot springs and fumaroles and geysers gushing forth gas and liquid from the depths. If Jules Verne is to be trusted, the very centre of the Earth can be reached via one of the craters of Snæfellsjökull, a snow-capped volcano on Iceland’s Western peninsular.

But I’d like to argue that Iceland has plenty to offer linguists and language lovers too. Here are just some of the highlights:

It all started with the Vikings

Like Danish and Norwegian, Icelandic is a Nordic language, part of the broader Germanic family. However, although it is derived from Old Icelandic, a western dialect of Old Norse, Icelandic is not a language that speakers of Danish and Norwegian can readily understand. This is because, since Iceland was first settled by Vikings in the 9th century AD, it has remained relatively isolated. While other Scandinavian languages (Faroese excepted) have changed substantially due to external influences from the rest of the continent, in its grammar, written Icelandic has not changed substantially in about a thousand years. As a result, modern speakers can still read the original Icelandic sagas of the 12th century.

It’s not just that Icelanders can still read the sagas – they still do. And they don’t stop there. As the narrator of Halldór Laxness’ Atom Station says of Iceland: “everything is read, beginning with the Icelandic sagas; and then everything.” When Jules Verne’s protagonists arrive in Reykjavik, on their famous Journey, their Icelandic host tells them: “every farmer, every fisherman, knows how to read and does read.” And, as well as being a nation of readers, Icelanders like to write too. Apparently, something like one in ten Icelanders will publish a book in their lifetime. Famous Icelandic authors include Laxness himself, who won the Nobel Prize for Literature in 1955.

A “magnificent language, both simple and rich” 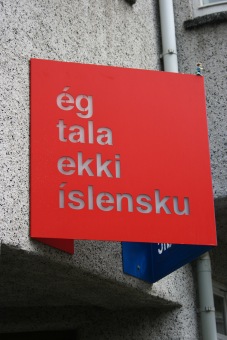 At the beginning of A Journey to the Centre of the Earth, Professor Lidenbrock tells his nephew Axel that Icelandic is “that magnificent language, both simple and rich, containing the most diverse grammatical combinations.” (It’s fitting indeed that Verne’s protagonist is as much a linguist as he is a geologist.) Alda Sigmundsdóttir, author of The Little Book of Icelandic, is a little less flattering. She calls her mother tongue “a bloody mess grammatically, a nightmarish mishmash of inflected nouns, verbs, adjectives and pronouns”.

For an English speaker, Icelandic certainly looks complicated in terms of its grammar. Like German, for example, it has four noun cases and three noun genders. But, because of its isolation, the vocabulary of Icelandic has remained relatively simple compared to that of English (which has shamelessly begged, stolen and borrowed words from a whole host of other languages). As a result, English words that used to mean the same thing in Icelandic tend to have undergone a process of relative semantic narrowing. For example, in Icelandic, hundur refers to any type of dog. In English on the other hand, as a result of competition with “dog” (from Old English), the cognate word “hound” now only refers to hunting dogs.

Geeking out on etymology

Because of the shared Germanic roots of Old Norse and Old English, and because many Old Norse words were adopted into Old English during the Viking settlement of the British isles, there are plenty of words in Icelandic that look familiar to English speakers, and vice versa. For example, the Icelandic word for house is hús, for book bók, for daughter dóttir, and so on.

Old Norse left its mark in particular on the geography of the British Isles. As a result, lots of Icelandic place names look familiar to speakers of British English (especially those from the north of the England). In Iceland, there’s Snæfell and Kirkjufell. In the Lake District, there’s Scafell and Low Fell. In Iceland, there’s the Hafnahólmi and Stykkishólmur. In the Bristol Channel, there’s Flat Holm and Steep Holm (a holm is an islet in a river). In the south of Iceland, there’s a town called Höfn (literally “Harbour”). In the south of England, there’s Newhaven. In downtown Reykjavik, there’s Lækjargata and Geirsgata (an Icelandic gata is a road or street). In my hometown of Nottingham, there’s Castle Gate and Wheeler Gate.

Incidentally, the word “Viking” derives from the Old Norse for bay (Reykjavík, as it happens, is literally “smoky bay”). As Sigmundsdóttir says, “it is pretty easy to geek out on Icelandic and English etymology if you like that sort of thing” – and, frankly, who doesn’t?

Perhaps my favourite thing about Icelandic is its alphabet, which still retains three graphemes from Old Norse which also existed in Old English but which don’t survive into written English today: eth (ð or Đ), thorn (þ or Þ) and æsc (æ or Æ). (I love this video for the song Dýrð í dauðaþögn by Icelandic artist, Ásgeir Trausti, as much for the Icelandic alphabet as for the music and the stunning scenery.) ð and þ represent voiced and unvoiced versions of two Icelandic phonemes which are similar to the two phonemes written, voiced or otherwise, as “th” in English. For phonologists, ð is a voiced alveolar non-sibilant fricative, and þ is the unvoiced version, both pronounced with the tongue slightly retracted compared to the English dental fricatives in “that” and “this”, respectively. In Icelandic, the letter æsc (also known as ash in English) signifies the diphthong /ai/ as in “ice”.

Although it’s a bit old fashioned in its gender politics, Icelandic names follow a delightfully simple patronymic system where a person’s surname is derived from their father’s first name by adding the suffix son (son) or dóttir (daughter). Author Alda Sigmundsdóttir is literally “Sigmund’s daughter”. Egil Skallagrimsson, the violently unhinged protagonist of the eponymous Icelandic saga, is the son of Skallagrim. And so on. 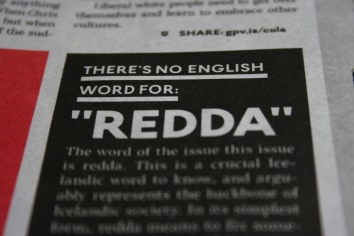 Icelanders are – justifiably – very proud of their language. As a result, the country has a somewhat conservative attitude towards the influx of foreign loanwords, especially from English. Officially, the Icelandic language is under the control of the Icelandic Language Committee, whose job it is to regulate the Icelandic lexicon and Icelandic grammar. As Sigmundsdóttir explains, it’s their job to invent new Icelandic words for new and foreign concepts. So for example, instead of taking the English word “computer” and assimilating it to Icelandic phonology (to kompjúter), the committee invented an entirely new word (tölva), which means something like “prophetess of numbers”. Still, despite their best efforts, Anglicisms are still creeping into informal Icelandic. Examples include: tjilla (to chill out), sækó (psycho) and sjitt (shit). Incidentally, there’s even an official list of first names that Icelanders are allowed to call their children (this one regulated by the Icelandic Naming Committee).

And don’t forget the clapping

And finally, as well as verbal and written communication, it’s worth adding that Icelanders also excel at the non-verbal variety – as anyone who heard Iceland’s travelling fans perform their “Viking thunder clap” at Euro 2016 will know. Frightening stuff!

All photos are by the author, and were taken in June 2016. For more information about the Icelandic language I can thoroughly recommend The Little Book of Icelandic by Alda Sigmundsdóttir.