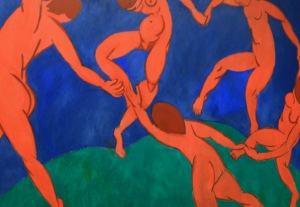 “Dance” by Henri Matisse, The Hermitage, St Petersburg [photograph by the author]

In a few short weeks the autumn clouds will roll in, the days will shorten, and it will be dancing season again. Across the Atlantic, 14 September will mark the return of ABC’s Dancing With The Stars. A week before that, here in the UK, the new season of BBC’s Strictly Come Dancing will see a fresh line-up of celebrities hoping to waltz, tango and salsa their way to victory.

As a big fan of Strictly, I recently decided to get off the couch and try to learn to dance myself. As well as getting some much needed exercise, I hoped it would give me a better understanding of dancing’s technical jargon (just what is a “chasse” anyway?) as well as some appreciation of what this year’s line-up of celebrities will soon be going through. I chose Lindy Hop in particular and, after a couple of months of classes, I’m pleased to say I can just about string together a whole song’s worth of basic moves. Although I can’t yet swing dance like former Strictly champion Chris Hollins, I like to think I’m no John Sergeant either.

But what has dancing got to do with a blog about language? Well, as a linguist, I’m discovering that learning to dance is similar – in many ways – to learning to speak a foreign language.

First of all, mastering your first few dance steps is easy and fun, a bit like learning your first “bonjour” or “ni hao”. But, there soon comes a point when the novelty wears off and things start getting difficult. The moment when the instructor tells you have to move your hands and legs at the same time in different directions is just like the moment when your language teacher tells you there are more irregular verbs in German than regular ones, or that there’s no fool-proof way of guessing which nouns in Spanish take which genders. Yet, despite the challenges, you still carry on. Because there’s something inspiring about watching an ex-England cricketer learn to dance the Paso Doble, just as there is something inspiring about watching an ex-England rugby star give an entire television interview in fluent French.

And there are more fundamental similarities too in the sense that dances are like languages, and dancing is a bit like speaking. Clearly, a Tuck Turn doesn’t have referential meaning in the same way that the words “tuck” and “turn” do. But dancing is certainly a form of social interaction and human communication, just like speaking is. And, although linguists like Noam Chomsky would have a field day explaining to you why dance doesn’t have a “grammar” in the same way that natural language does, it does have similarities in the sense that an endless number of different dances are produced by individuals combining a limited number of recognisable moves in highly creative and productive ways.

One evening, while grappling with the footwork of the Charleston Hand-to-Hand, I started to think about all the other similarities between learning to dance and learning a foreign language. And, in the end, I could easily think of more than a dozen ways that learning to dance is just like learning to ask someone in Mandarin: “are you dancing?”

So, in celebration of this year’s festival of sequins and lycra – and of the joys of language learning – here are 10 ways in which learning to waltz is just like learning Welsh – or Spanish, or Japanese, or Swahili: