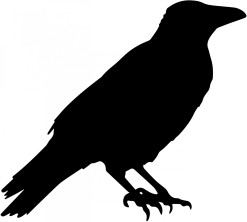 Every year, Swansea University awards the Dylan Thomas prize for young writers. This year’s winner was Max Porter for his debut novel, Grief Is The Thing With Feathers, the tale of a grieving father and his two young boys coming to terms with the death of their mother. It’s a short work, just over one hundred pages long, as much prose poem as novel. It’s sad, funny, and honest. It’s also linguistically inventive. I liked it a lot.

The story, in which the father and the boys are helped in their grieving by a magical, mischievous crow, is inspired by the poetry of Ted Hughes. It’s fitting that, like the work of Ted Hughes, Potter’s book is also marked stylistically with the use of novel compounds. Here’s how it starts with the father describing the first few days after the mother’s death:

“I felt hung-empty. The children were asleep, I drank. I smoked roll-ups out of the window. I felt […] I would permanently become this organiser, this list-making trader in clichés of gratitude, machine-like architect of routines for small children with no Mum.”

On the next page, there’s “knotted-string dream” and “dinner party post-mortem bitches”. At some point the protagonists find themselves “loving the journey of hurting, hurting-hurting”. The flat they live in is “spit-level”. And so on.

Even if Porter isn’t always consistent with his use of hyphens (there are also “ball drops” and “dread dead”), “hung-empty”, “spit-level” and so on are all linguistic compounds. They are words (mostly nouns and adjectives, but also verbs and adverbs) formed by combining together two or more other words. (Technically, a compound must contain at least two root morphemes). And they are novel – at least in the sense that they don’t appear in the dictionary.

I’ve written about compounds before. They fascinate me because they show creativity – which is, after all, about novel combinations – in perhaps its purest and most essential form.

And it’s not just me who’s into them. Researchers have written entire theses on the subject – about compounding in contemporary English poetry, for example, or the various types of compound nouns in Middle English verse. Certainly, Ted Hughes liked his compounds. He even said once that the first praise he received as a young poet was for a compound epithet he’d written.

Max Porter’s book is also full of them. Sprinkled across the pages are two-part compound nouns (or nominal compounds). They include: “left-behinds”, “cock-cheek”, “futile curse-lifting”, “song-legend”, “death-chill”, “plum-pear”, “garden-song”, and “ball drops”. The visiting crow does a lot of what is perfectly described as “unbound crow stuff”.

Most of these compounds are what linguists call “endocentric”. That is, they consist of a head (the second part of the compound), which defines the general category of the compound, and a modifier (the first part) so that “death-chill” is a special type of “chill”, and so on. A few, however, are “exocentric” in that don’t have a formal head. “Left-behinds”, for example, is made up of a verb and an adverb. Although it is a noun, it’s not a type of “behind”.

Again, most of these are endocentric with adjectival heads modified by either another adjective (“hung-empty”) or a noun (“Shakespeare-heavy”). Again, a few are exocentric. “Blood-sport”, for example, is formed by conversion of a (compound) noun to a (compound) adjective, and doesn’t have a formal head. Again, all are wonderfully creative.

There are compound verbs, including “back-kicked the door shut” and “mourn hunt with pack lunches”. The compound verbal noun “curse-lifting”, above, is itself formed from a compound verb (“curse-lift”), as are the compound adjectives (technically participles) “God-eating”, “trash-licking”, “word-murdering” and “carcass-desecrating”. I also spotted one compound adverb, in “the beak hurled down hammer-hard”.

Porter is so at home with compounds that sometimes he uses hyphens to compound words where generally you wouldn’t. “White-speckled mess”, above, is one example. Elsewhere the dad recalls the mother saying, “it hurts, fuck, fuck-fuck it hurts”. The hyphen here doesn’t just help in capturing the rhythm of speech (you could also imagine punctuating this as “it hurts. Fuck. Fuck, fuck, it hurts”). More powerfully, the hyphen also gives a sense of going beyond “fuck” to a compound fuck: a sort of double-fuck or fuck-squared. And even where the compounds aren’t novel, Porter always employs them with a skilful sense of rhythm as in this sentence early on: “we were young boys with remote-control cars and ink-stamp sets”.

In sum, Grief Is The Thing With Feathers is well worth a read. Not least, it’s a master-class in lexical creativity, a real Ted-fest of compounds, jam-packed with “unbound crow stuff”. The man himself would have been impressed.

3 thoughts on “Grief Is The Thing With Compounds”