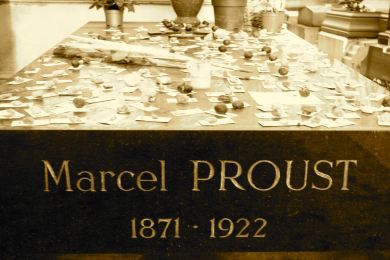 Marcel Proust was a neuroscientist, according to researcher-turned-sciencewriter, Jonah Lehrer. I’d like to argue, he was also a linguist.

Lehrer might have been publically disgraced for inventing Bob Dylan quotes in a follow-up book about creativity, but he had a point. The great rememberer was interested in a great many things – in music and theatre, in nature and architecture, in fashion and society, in love and jealousy, in time and memory. And if you’ve ever read any of the volumes of A La Recherche du Temps Perdu (recently reimagined as a graphic novel), you’ll know he was fascinated – above all – by how we conceive and perceive these things in our heads. Proust’s interest in psychology was profound enough to have inspired a personality questionnaire that still features regularly in Vanity Fair magazine. And political commentators are even now referring to Proust in trying to make sense of Donald Trump.

After a recent trip to Paris, I was inspired to finally sit down and read the five hundred or so pages of Swann’s Way, the first volume of Proust’s epic novel. Although I knew he’d have a lot to say about art and psychology, about nature and society, I was surprised at how much he had to say about language.

So, as well as being a neuroscientist, I’m going to argue that Proust was also very definitely a linguist. Here are ten reasons why:

1. Just like any good linguist, Proust knew his parts of speech

To describe and study language you first need to be able to categorise and label its various components. In Swann’s Way, for example, Proust talks of the “imperfect” and the “preterite”, “proper names”, “metaphors”, “figures of speech”, “indirect speech”, and “particles”.

Proust was definitely into his etymologies. As well as a whole section in Swann’s Way devoted to place names (and the various romantic associations the narrator makes with them), Proust makes various etymological asides. Like this one:

(I’m not certain, by the way, of the etymology of Roussainville. I’m rather inclined to think that name was originally Raville, from Radulfi villa, analogous, don’t you see, to Châteauroux, Castrum Radulfi, but we’ll talk about that some other time.)

Relating to his interest in the origins of words, Proust had an understanding of how language changes over time. For example, he mentions elision, a key process in language change in which words, or bits of words, get left unsaid:

[Mme Verdurin] still said instinctively “the de La Trémoïlles,” or rather (by an abbreviation sanctified by usage in music hall lyrics and cartoon captions, where the “de” is elided), “the d’La Trémoïlles,” […]

4. And he understood how new words and phrases can become old hat

In Swann’s Way, Proust shows insight into how new bits of language – particularly words and phrases – are born. For example, he describes how “do a cattleya” becomes a shared euphemism for more intimate physical acts, after Swann uses the pretext of rearranging an orchid on Odette’s dress to lean in for their first kiss. He describes how the phrase becomes a key part of the two lovers’ shared language (what linguists might call a famiolect), which eventually loses all association with the flowers themselves.

Proust also knew how new words and phrases (like “to give a free hand” and “to be absolutely floored”) can be born as metaphors – another major force for language change – and how, over time, the literal origins of such metaphors can be gradually forgotten:

[antique pieces of furniture] charmed her like those old forms of speech in which we can see traces of a metaphor whose fine point has been worn away by rough usage.

Proust knew that some metaphors – like “splitting hairs” – can become so overused that they become clichés. And, cloaked in satire, he had an Orwellian dislike of them:

“D’you know, that’s a funny thing; I had never noticed it. I may as well tell you that I don’t much care about peering at things through a microscope, and pricking myself on pin-points of difference. No, we don’t waste time splitting hairs in this house,” Mme Verdurin replied, which Dr Cottard gazed at her with open-mouthed admiration and studious zeal as she skipped lightly from one stepping-stone to another of her stock of ready-made phrases.

5. He knew something about how words and concepts are stored in our brains

Proust’s narrator speaks often of the “associations” he makes between the various things he encounters and different parts of his memory – what he refers to as the tangled network of “mental habits, of seasonal impressions, of sensory reactions”. Psycholinguists (and neuroscientists in general) differentiate between our episodic memory (where we store information about specific instances and experiences in our lives) and semantic memory (of facts, ideas, concepts, and meanings) – although both are connected and interdependent. Proust also knew that different concepts in our semantic memory can be more closely connected than others. When referring to Swann’s Way and the Guermantes Way, near his family’s home at Combray, the narrator talks of “the distance that there was between the two parts of my brain in which I used to think of them”.

Proust also understood how our semantic memory connects to another network in our brain where we store the words or lexemes (including proper names) that represent the concepts within it:

Thus was wafted to my ears the name of Gilberte, bestowed on me like a talisman which might, perhaps, enable me some day to rediscover the girl that its syllables had just endowed with an identity, whereas the moment before she had been merely an uncertain image.

6. He could see connections between concepts and the sound of the words

For a long time, one of the most fundamental assumptions in linguistics was the arbitrariness of the sign. That is, as language develops, lexemes (like “love”) are chosen to represent the underlying semantic concept in an entirely accidental way, so that the string of phonemes in the word has no meaning in itself. These days, it’s more readily accepted that this isn’t always true. Words can, and quite often do, have a degree of iconicity. Proust was definitely aware of the possibility of associations between the component sounds of words and the concepts they represent. For example, when the narrator thinks about the Norman Cathedral in Coutances, he imagines “its final consonants, rich and yellowing, crowned with a tower of butter.” Elsewhere in Swann’s Way, the pronunciation of “ch” leads to a sensual association between the word “charming” and a budding flower:

And she [Mme de Laumes] murmured, “How charming it is!” with a double ch at the beginning of the word which was a mark of refinement and by which she felt her lips so romantically crinkled, like the petals of a beautiful, budding flower […]

7. And he knew what happens when connections go missing

Proust was aware that certain neurological disorders, resulting from brain disease or injury, can lead to the loss of these lexemes, or the ability to access them (asphasia), or even the loss of the underlying concept in the semantic memory:

Moreover, the name Swann, with which I had for so long been familiar, had now become for me (as happens with certain aphasiacs in the case of the most ordinary words) a new name.

8. He’s not just interested in what people say, but how they say it

Throughout the novel, Proust pays close attention to how his characters speak, in particularly to prosody (stress and intonation). For example, the narrator manages to make Swann sound like a precocious university student:

[…] whenever he spoke of serious matters, whenever he used an expression which seemed to imply a definite opinion upon some important subject, he would take care to isolate it by using special intonation, mechanical and ironic, as though he had put the word or phrase between inverted commas […]

What Proust refers to as “intonation” and “accentuation” (and what is often translated into English as “tone” by Moncrieff and Kilmartin) is more generally what linguists refer to as (speaking) style. He knows that his characters, like real people, use different styles – which might be more or less formal – at different times, according to who they are speaking to, what they are speaking about, and why. For example, the narrator says that Odette “invariably adopted a poetical tone when she spoke to Swann about my uncle”. And Proust knew that speaking in a style which is not appropriate to the context is not a very gentlemanly thing to do:

[Swann] was shocked, too, being accustomed to good manners, by the rude, almost barrack-room tone the pugnacious academic adopted no matter to whom he was speaking.

9. He knew that our identities are created in what we say and how we say it

The view that identity is “created”, “constituted” and “constructed” (all Proust’s words) is a prevalent one in applied linguistics, and across the social sciences. Instead of the (essentialist) perspective which says we all have only one unique and stable personality, the theory says instead that our identity is the sum total of what we do and what we say – each an act of identity or identification with a certain group of people. For example, if we throw a baseball, we are telling people we are sporty. If we speak in a French accent, we are telling people that we’re French. If we speak in a style associated with the upper classes (for example, Swann speaks with the “the style of the Guermantes set”) we are identifying with them. If we mention Proust in a blog, of course, we are telling people that we think we’re clever. And so on.

Early on in Swann’s Way, it’s clear that Proust shares the same (socially-constructed) view of identity:

But then, even in the most insignificant details of our daily life, none of us can be said to constitute a material whole, which is identical for everyone, and need only be turned up like a page in an account-book or the record of a will.

And like any good applied linguist Proust knew that, because we can speak or act differently around different people, we can create different versions of ourselves:

Doubtless the Swann who was a familiar in all the clubs of those days differed hugely from the Swann created by my great-aunt when, of an evening, in our little garden at Combray, after the two shy peals had sounded from the gate […].

10. And he’s interested in what code-switching says about our identity

One way of creating a complex identity is to mix languages – what linguists call code-switching. Odette, for example, is very prone to litter her French with English words and phrases:

The narrator describes how, in pronouncing the word “gentleman”, she clenches her teeth “so as to give the word a kind of English accentuation”. Is Odette simply showing off? Is it pomposity? It’s difficult to tell, but the code-switching adds a layer of nuance to her character.

So, there you go. I hope I’ve done enough to argue that Proust was more than just a great rememberer and novelist. As well as a neuroscientist – and probably a great many other things – he was a pretty good linguist too.

12 thoughts on “Proust Was A Neuroscientist… And Also A Linguist”