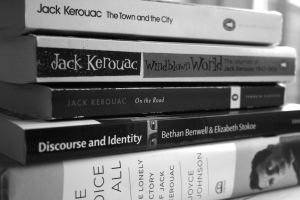 As biographer Joyce Johnson points out, Jack Kerouac was many things.

As well as being the beatnik author of On The Road, Kerouac was also a conservative, Catholic Republican. He was a college football star as much as he was a Thomas Wolfe reading poet. He was a Joual speaking French-Canadian who became the all-American novelist, and he was a middle class, white kid from Lowell, Massachusetts who identified strongly with African American culture and jazz music. And, alongside his friend Allen Ginsberg, Kerouac was certainly one of the great literary innovators of the twentieth century.

But I’d like to suggest another side to Jack Kerouac’s multi-faceted identity. I’m going to claim that Jack Kerouac was also a linguist – in particular, a sociolinguist.

As the label suggests, sociolinguists – like William Labov – strive to understand the relationship between language and society. Like all linguists, sociolinguists are interested in the structural features of language (at the level of syntax, morphology, phonology and prosody). And, unlike some linguists, they are also interested in the structure and organisation of these features within everyday conversations and passages of text (at the level of “discourse”). However, what sociolinguists are particularly interested in is how these aspects of language relate to the different people – and groups of people – that make up society. Through pioneering research in the department stores of New York City in the 1960s, for example, Labov showed that whether or not a person there pronounces the “r” sound in words like “fourth” and “floor” is a good indicator of socioeconomic class.

The link between language and identity – in terms of social class, nationality, ethnic background, gender, profession, and so on – remains a very active field of research to this day. In general, sociolinguists are interested in the question: how do we use language (and languages) to construct and negotiate the various aspects of our identities? For example, if I pronounce “bath” to rhyme with “maths” (rather than “Brienne of Tarth”) then I am clearly telling fellow Brits that I am not from the South of England. If I say “lexeme” (instead of “word”) I’m identifying myself as a linguist. And so on.

As you might expect of a writer, Kerouac was certainly interested in language. In the summer of 1949 he began filling one of his notebooks with “private philologies”, noting the derivations of various words and exploring what could be suggested, beyond their meanings, by the way they sounded. In his diaries, Kerouac often reflects on his French-Canadianness, musing that his real identity – his true self – was the Joual speaking boy from Lowell who never made an appearance in public. The relationship between bilingualism and identity remains a very active area of research in applied linguistics (Googling the two words “bilingualism” and “identity”, for example, returns about 500,000 search results).

And Kerouac was very much interested in people too (especially, as the famous quote goes, the “mad ones”). In 1946, when he was introduced to Neal Cassady – the car stealing, Proust-reading, “mad to live” hero of On The Road – Kerouac found, as well as a great friend, the subject for his greatest art. Kerouac even devotes one of his novels, Visions of Cody, in its entirety to a “character study” of Neal (“Cody Pomeray” in the novel).

But Kerouac doesn’t just write about Neal. What is remarkable for a work of literature – even for an experimental one like Visions of Cody – is that Kerouac also recorded his subject speaking. Just like any good sociolinguist, using a portable tape recorder, Kerouac recorded entire conversations between himself, Neal and their friends doing what they normally did – sitting around, talking, listening to jazz records, and smoking “tea”. Kerouac then transcribed the conversations directly into the novel.

And he did so in a remarkably systematic way: Italics are used to indicate stress (“It was my idea”); capitals are used to indicate even greater stress (“YOU know”). In punctuating the dialogue, Kerouac rarely uses full stops, obviously aware that human speech seldom fits into well formed sentences. Instead, he marks pauses of various lengths by hyphens, commas or ellipses (“…”). He also uses italics and parentheses to provide contextual information or paralinguistic details. It may not quite hit the industry standard that conversation analysts use when transcribing speech (and it might not be “impeccably accurate in syntax punctuation” as Ginsberg suggests in his foreword to Visions) but it’s pretty good: if not the work of a trained linguist, it’s the work of someone with a keen ear for “real” language.

Here’s a good example of Kerouac’s transcription from a section called “The Party”, where Jack and his friends are goofing around, listening to music (my highlighting in bold font):

PAT. That ‘Leave Us Leap’, Gene Krupa’s ‘Leave Us Leap’, (‘Them There Eyes’ begins on phonograph) Boy it’s got, oh man,     you got – piano passage in it that’s terrific… Everything, everything in the thing is good. Did you – did you hear that ‘Charmaine’ by Billie – Billie –
JACK. I can’t remember ‘Leave Us Leap’
PAT. ‘Leave us Leap?’ Oh man it’s sensational
JACK. Ray Eldridge on it?
PAT. – one of the best numbers I ever heard. Doesn’t tell you. Must be
JACK. Well he had quite a band, sure
PAT. (as Cody talks far un background saying: I saw…) But man that ‘Leave Us Leap’, it’s just … it’s almost like ‘I Want to Be Happy’ with Glenn Miller, you know? Sounds like there’s a tension… (as Jack sings ‘I Want To Be Happy’ in harmony with ‘Them There Eyes’) No… ten times as fast as that
JACK. That’s fast enough… that’s the tune
PAT. That’s what it said on the label but you’d never know (Jack laughs) The tension and the drive all the way through
JACK. (bemused at phonograph) Ooh… well play the Dizzy
PAT. (still reading cookbook) Huh?
JIMMY. (playing with the toy telephone) Can you tell me why the manufacturer forgot to put a hole in the part where you hear through?
PAT. So it’s so you can call your wife
JIMMY. Ah… I was –
CODY. (laughing) So you can call your wife…

You might argue that the transcription doesn’t make for great literature (and you probably wouldn’t be alone in thinking that). But it does make for interesting research. By carefully analysing the dialogue line-by-line, word-by-word, a sociolinguist might start to look at what (and how) identities – such as “American”, “friend”, “jazz aficionado”, “heterosexual male” – are constructed and negotiated as the conversations progress.

For example, Pat’s use of “boy” and “man” in the first few turns of the dialogue mark him out – most broadly – as an American (rather than, say, an Englishman). In referring to Jack with these terms of address, and through the use of a generally informal register (for example, “numbers” for songs), Pat seems to be indexing friendship and familiarity with Jack and the others. Throughout the dialogue, Jack and Pat use a variety of specialist terms (such as “the drive”, “piano passage” and “Ray Eldridge”) to mark their statuses as jazz aficionados. Clearly only a cool Jazz cat like Jack would ask someone to play “the Dizzy” (Gillespie record). Finally, at the end of the passage, Pat makes a joke which – because it relies on a sexist stereotype of the verbose wife – arguably marks him out as a heterosexual male and one of the “boys”. In laughing at the joke, Cody aligns to the same group identity. For any sociolinguist, the sort of data that Kerouac painstakingly transcribed is gold dust.

As well as doing an excellent job of transcribing his conversations with Neal Cassady, Kerouac was also well aware of two key methodological concerns for any sociolinguist.

First of all, he was aware of the observer’s paradox. As formulated by Labov, the paradox states that whenever you try to observe people talking naturally, what you observe is always going to be (at least partly) affected by the subjects’ awareness that they are at that moment being observed. One way around the paradox is to record people in secret but, since that would be highly unethical, it’s a no-no for modern sociolinguists. Kerouac’s approach was more blunt, and only marginally more ethical: he got Neal so high on marijuana that he was no longer aware he was being recorded.

Secondly, Kerouac (or at least his publishers) were well aware of the issues of attributing the data to particular individuals. As with modern sociolinguistic studies, the names of the subjects were all changed to keep the people concerned anonymous: Kerouac himself becomes “Jack Duluoz”; Neal Cassady becomes “Cody Pomeray”, and so on.

So, there you have it. In terms of his deep interest in people and identity, his natural instinct for language, and his pioneering methods of data collection, I hope I’ve shown that – on top of being a great novelist – Jack Kerouac was also a pioneering sociolinguist.

And, as Allen Ginsberg wrote in the foreword to Visions of Cody, great art “lies in the sacrementalization of everyday reality, the God-worship in the present conversation”. While that’s clearly the concern of great writers like Kerouac, I hope I’ve also shown, that’s the realm of linguists too.

7 thoughts on “Tape Recordings of Cody: Why Jack Kerouac Was a Sociolinguist”